Reaching Out To Japan: A Message From The Trend Boutique…

The Trend Boutique is asking our readers to reach out to the people of Japan by doing what you can to support them in a time of crisis. We know the issue is overwhelming and some of you may doubt your ability to help during such a major disaster. But at this point, we have to just base our actions on good intentions and hope. There’s someone halfway across the world right now, searching for a friend or family member-one of the thousands of people still missing or unaccounted for in Japan. And of course, we all hope and pray that they are reunited with their loved ones. But even though we can’t walk besides them during their search, organizations like American Red Cross, International Rescue Committee and Save The Children can put our hopes and prayers into action. We can contribute to the relief efforts by donating.

Compassion comes in many forms. Humanity, empathy and support…

You can also  donate to the American Red Cross for Japan Earthquake Relief, by texting REDCROSS to 90999. Each text will provide $10 towards their humanitarian efforts.

Lady Gaga designed a “We Pray For Japan” wristband that is being sold on her official store site for $5. All the proceeds will go to the relief efforts. 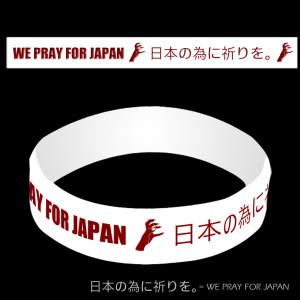 UPDATE (April 27, 2011): We finally received our Gaga/Japan bracelets! Everyone in the office and warehouse is wearing them! Here’s a picture of a few of the gals showing their support!

MadeWithJapan.com is donating 100% of the profits from their Japanese-inspired t-shirt line.

The fashion industry is doing their part also. Rebecca Minkoff is donating $100 from the sale of each red handbag to the American Red Cross.

Bergdorf Goodman has turned its Facebook page into a donation center, allowing fans to donate to various causes. Uniqlo, Theory and Comptoir des Cotonniers will be accepting clothing donations at their stores. Coach made a donation of $5 million. Forever 21 is also donating 100% of today’s online sales to the relief efforts. We commend your efforts! Bravo!

Click here to read about more ways to help!

About The Trend Boutique

The Trends You Want To Wear, From Today's Hottest Designers! http://www.shopthetrendboutique.com/
View all posts by The Trend Boutique →
This entry was posted in All and tagged American Red Cross, Earthquake & Tsunami Relief Efforts, Fashion For Japan, Fashion Supports Japan, International Rescue Committee, Japan, Lady Gaga, MadeWithJapan.com, Save The Children, Songs For Japan. Bookmark the permalink.